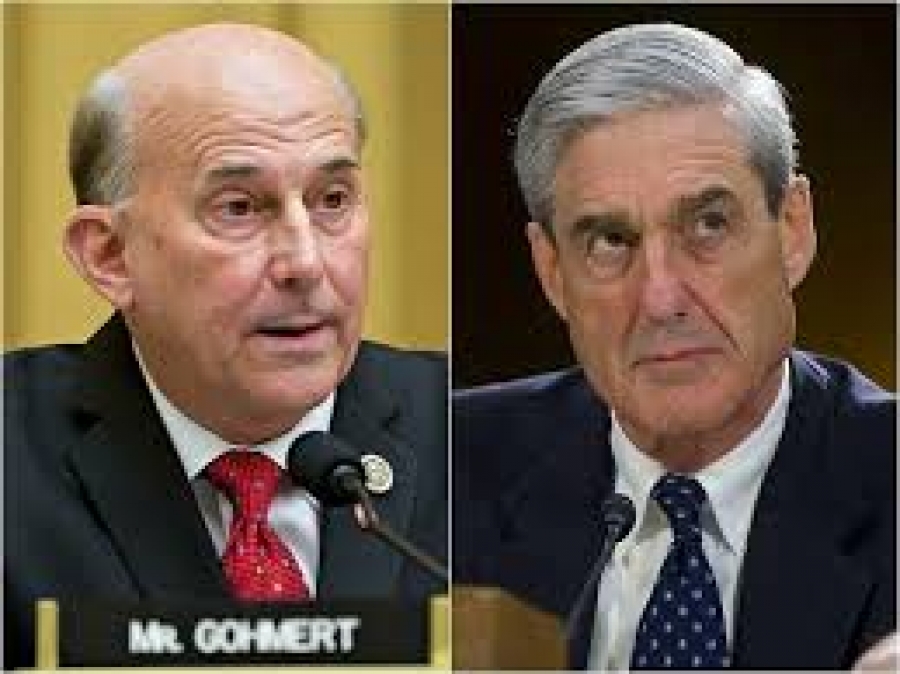 www.GaltReport.com | Louie Gohmert | Congressman Gohmert (R-TX) has written a tour-de-force on exposing Former FBI Director and current Special Prosector Robert Mueller as a man who will threaten, harass, prosecute or bankrupt someone to get them to allege something --anything-- about our current President (pdf attachment below).

Any Republican who says anything resembling, “Bob Mueller will do a good job as Special Counsel,” “Bob Mueller has a great reputation for being fair,” or anything similar; (A) wants President Trump indicted for something and removed from office regardless of his innocence; (B) is intentionally ignorant of the myriad of outrageous problems permeating Mueller’s professional history; or (C) is cultivating future Democrat votes when he or she comes before the Senate someday for a confirmation hearing.

“[Mike] Albano [former Parole Board Member who was threatened by two F.B.I. agents for considering parole for the men imprisoned for a crime they did not commit] was appalled that, later that same year, Mueller was appointed FBI director, because it was Mueller, first as an assistant US attorney then as the acting U.S. attorney in Boston, who wrote letters to the parole and pardons board throughout the 1980s opposing clemency for the four men framed by FBI lies. Of course, Mueller was also in that position while Whitey Bulger was helping the FBI cart off his criminal competitors even as he buried bodies in shallow graves along the Neponset…” -- Boston Globe

Mueller was the head of the Criminal Division as Assistant U.S. Attorney, then as Acting U.S. Attorney insisted on keeping the defendants, framed for murder by FBI agents "in the pocket" of Whitey Bulger, in prision.  Ultimately, taxpayers got stuck with a $100 million bill for compensating the frame men, two who died in prision. -- Boston Globe

Massachusetts state police and the Boston Police Department had wondered whey their investigations of Mr. Bulger were always seemed to be compromised before they could get enough evidence against him, and they suspected the FBI was protecting him. -- New York Times

Gohmert points out a recurring theme with Mueller -- the leaking of information to disparage Mueller's targets.  If you are on Mueller's list, "you get punished even if you are framed. He never apologizes when the truth is learned, no matter how wrong or potentially criminal or malicious the prosecution was".

During Gohmert's first term in Congress, Congressman Curt Weldon made serious allegations that the FBI had prior knowledge that 911 was going to happen and could have been prevented if the FBI had done it's job.

"What I did not know, Mr. Speaker, up until June of this year, was that that secret program called Able Danger actually identified the Brooklyn cell of al Qaeda in January and February of 2000, over one year before 9-11 ever happened. In addition, I learned that not only did we identify the Brooklyn cell of al Qaeda, but we identified Mohamed Atta as one of the members of that Brooklyn cell along with three other terrorists who were the leadership of the 9-11 attack.
I have also learned, Mr. Speaker, that in September of 2000, again, over one year before 9-11, that Able Danger team attempted on three separate occasions to provide information to the FBI about the Brooklyn cell of al Qaeda, and on three separate occasions they were denied by lawyers in the previous administration to transfer that information." - Rep. Curt Weldon House Floor Speech, October 19, 2005

Representative Weldon gave multiple speeches on theFBI and Clinton adminsitration failures that led to 911. Here is another.

In 2006, the Robert Mueller-led FBI took horrendously unjust actions to derail Curt Weldon’s re-election bid just weeks before the vote—actions that were later described as a “hit job” in this WND article:

“Each of Weldon’s 10 previous re-elections had been by sizable margins. Polls showed he was up by 5-7 points [in the fall of 2006]. Three weeks prior to the election, however, a national story ran about Weldon based upon anonymous sources that an investigation was underway against him and his daughter, alleging illegal activities involving his congressional work. Weldon had received no prior notification of any such investigation and was dumbfounded that such a story would run especially since he regularly briefed the FBI and intelligence agencies on his work.  A week after the news story broke, alleging a need to act quickly because of the leak, FBI agents from Washington raided the home of Weldon’s daughter at 7 a.m. on a Monday morning… Local TV and print media had all been alerted to the raid in advance and were already in position to cover the story. Within hours, Democratic protesters were waving “Caught Red-Handed” signs outside Weldon’s district office in Upper Darby. In the ensuing two weeks, local and national media ran multiple stories implying that Weldon too must have been under investigation. Given the coverage, Weldon lost the election…To this day, incredibly, no one in authority has talked to Weldon or his daughter about the raid or the investigation. There was no follow up, no questions, no grand jury interrogation, nothing. One year after the raid the local FBI office called Weldon’s daughter to have her come get the property that had been removed from her home. That was it…The raid ruined the career of Weldon and his daughter.” (Emphasis added). -- WND Article, 2016

Gohmert speculates that President Obama and knew of Mueller’s reputation and that he cold be used to take out political opponents.  Obama went on to ask Mueller to say on for two more years than the 10 years allowed under the law. Knowing Mueller's history, Gohmert objected to Deputy Attorney General Rod Rosenstein's appointment of his friend Bob Mueller to be Special Counsel.