fromthetrenchesworldreport.com | A little known fact for those that are unaware of this tactic used by the government. It regards gunsmiths and the BATFE (Bureau of Alcohol, Tobacco, Firearms, and Explosives.

fromthetrenchesworldreport.com | (Video) Editors Note: The governments fight for gun control has taken another familiar turn to us that know the tactics that they use. They will not only go after certain types of guns, but they are now targeting lead ammunition and the banks that give lines of credit to manufacturers. It is our responsibility to support all gun and ammo manufacturers in this fight. How can you do it?

1) Buy their merchandise! And also follow-up with letters to the manufacturers to let them know that by your supporting them through your purchases, you expect them to return the favor by fighting for not only their right to have a business, but all of our rights to keep and bear arms.

2) Encourage these companies by letting them know that we will support them by refusing to patronize any banking institution that refuses them lines of credit to conduct business. Banks rely on deposits and loans from people like you to do business.

3) You need to write any bank that refuses lines of credit to these companies. Let them know that you will boycott them. Tell all your friends that they should not have any vested interest in any company that tries to subvert our Constitution by using these type of business tactics.

ammoland.com | San Diego, CA --(Ammoland.com)- There are two more regulatory storm fronts moving in that may make it difficult or impossible to get the ammunition that firearm owners need to defend themselves and their families, and to engage in the shooting sports.

The uncoordinated attacks come separately from neo-enviro groups and from the Bureau of Alcohol, Tobacco, Firearms, and Explosives. But taken together, these two separate proposals from these two separate groups create a perfect storm that could potentially result in an absolute ban on almost all ammunition.

whatreallyhappened.com | Editors Note: Contrary to popular belief or real facts, police are not obligated to protect you from the criminals. Here below are cases that only go to prove that the best defensive measures are when citizens are willing and able to defend themselves until police arrive if at all.

Warren v. District of Columbia - 1981 – Two women were upstairs in a townhouse when they heard their roommate, a third woman, being attacked downstairs by intruders. They phoned the police several times and were assured that officers were on the way. After about 30 minutes, when their roommate’s screams had stopped, they assumed the police had finally arrived.

When the two women went downstairs they saw that in fact the police never came, but the intruders were still there. As the Warren court graphically states in the opinion: “For the next fourteen hours the women were held captive, raped, robbed, beaten, forced to commit sexual acts upon each other, and made to submit to the sexual demands of their attackers.” The three women sued the District of Columbia for failing to protect them, but D.C.’s highest court exonerated the District and its police, saying that it is a “fundamental principle of American law that a government and its agents are under no general duty to provide public services, such as police protection, to any individual citizen.” Warren v. District of Columbia, 444 A.2d 1 (D.C. Ct. of Ap., 1981). 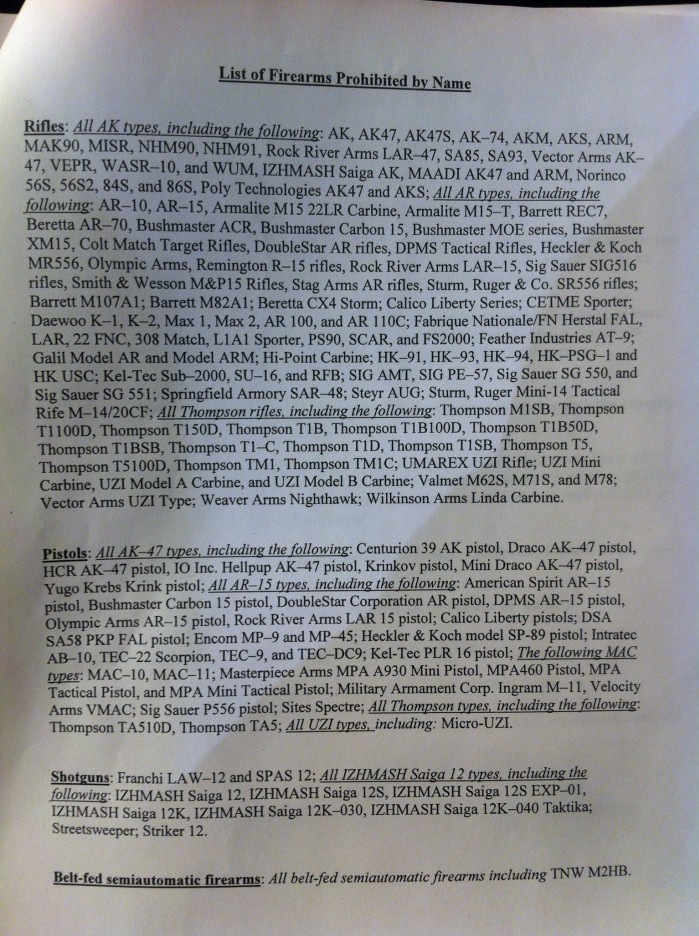 lt Report.com | The following list is compiled from the bill that Senator Feinstein has introduced for legislation.The origin of the article where this was found can be found here at The Daily Caller.

Note: This list does not include the proposed ban on ALL high capacity magazines which I  am positive that they will include in some other piece of this legislation as well as the manufacture and distribution for sale of the same equipment.

The good news is that this has not happened yet folks. And all of you that think that you are safe because your gun is not listed here should not think you are out of the woods yet because as we all should know, any gun that has the capacity to hold a high capacity magazine would naturally be a target in the eyes of the anti-gunners.

(click the image above to see full size image) 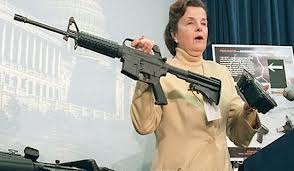 Washingtontimes.com | Sen. Dianne Feinstein’s office confirmed that she will be introducing in the Senate Thursday a new version of the so-called assault weapon ban. A spokesman said the full text will be released at a press conference on Thursday.

The California Democrat intends to expand on the ban that expired in 2004, by including handguns and shotguns, in addition to rifles. She would decrease from two to one the number of cosmetic features on a gun to have it be considered an “assault weapon.” This means that if a gun has just one item like a pistol grip or bayonet lug, then it is illegal. Gov. Andrew Cuomo signed into law the same ban in New York last week.

Furthermore, instead of grandfathering in current firearms, she would create a national gun registry for the government to track lawful gun owners. Magazines would again be limited to 10 rounds.